A poor December quarter has driven the local share market to its worst yearly performance since 2011, as the benchmark index hit a two-year low in the final few days of trading for 2018.

The S&P/ASX 200 Index ended the quarter 561.2 points, or 9% (excluding dividends) lower at 5,646.4, its worst quarterly performance since September 2011.The ASX200 Accumulated Index which includes dividends returned negative 3.93% over the quarter.

Three of the major banks led the market fall during the quarter as the bank chiefs faced the Banking Royal Commission and shareholders voted down remuneration reports. ANZ slid 13.2% to $24.46, NAB closed 13.4% lower at $24.07 and Westpac declined 10.3% to $25.04. Commonwealth Bank fared much better, rising 1.4% to $72.39 as it avoided a larger sell-off from the other three during mid-November.

Energy stocks were also hit as the price of oil continued to tumble. Investors had been hoping OPEC’s proposed production cuts would halt the decline in global crude prices but concerns over slowing demand and increased supply in the United States pushed the commodity into a bear market. Woodside Petroleum led the losses on the local market, falling 18.8% to $31.32 during the quarter. Origin Energy slid 21.7% to $6.47.  The government also announced strong measures to curb climbing power prices earlier in the quarter, extending the losses in the sector.

It was a poor quarter for global equity markets as economic growth concerns in the US and continued market volatility pushed the Nasdaq into a bear market for the first time since the global financial crisis.

Despite falling more than 6% during 2018 and recording its worst yearly performance since 2011, the Australian share market outperformed most other major equity markets around the globe in 2018, although with a lot of volatility. 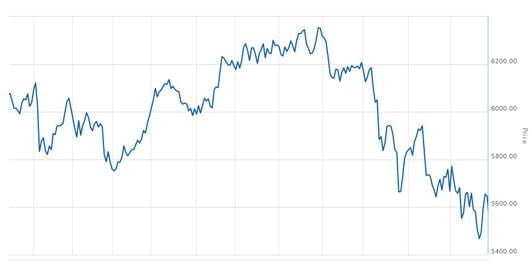 The downturn in Australian housing conditions accelerated through 2018, driven by consistently larger quarter-on-quarter declines in Sydney and Melbourne together with a reprisal in Perth’s rate of decline and slowing conditions across the remaining capital cities and most regional markets. The year finished with national dwelling values down 4.8%, ranging from an 8.9% fall in Sydney values through to a 9.9% rise in values across regional Tasmania.

Most regions of Australia recorded a weaker housing market performance in 2018 relative to 2017. Four of the eight capital cities recorded a decline in dwelling values over the calendar year led by Sydney (-8.9%) and Melbourne (-7.0%), while values were also lower across Perth (-4.7%) and Darwin (-1.5%). The remaining capital cities recorded a rise in values, although conditions weren’t as strong as 2017 with every capital city recording a weakening in the pace of growth or an acceleration in the rate of decline over the year.

Although Sydney and Melbourne recorded the weakest conditions, the peak to current declines are much less severe relative to Perth and Darwin where values have been falling since mid-2014. Sydney values are now 11.1% lower relative to the July 2017 peak and Melbourne values are down 7.2% since peaking in November 2017. The downturn has been running much longer in Perth and Darwin, resulting in cumulative falls of 15.6% and 24.5% respectively.

While we do expect further falls of probably 5% – 10% in property values over Sydney and Melbourne (following a 10 year run of growth!) it’s hard to see the doomsday scenarios of a further 40% fall eventuating as predicted by some. For this to happen we would need to see a material about face in labour market conditions, a global shock or a material rise in interest rates – none of which seems to be a likely outcome at the moment.