Local: The ASX200 index lost ground over the month falling 1.9%

Global: The S&P500 index also struggled over September falling 4.7%. The Evergrande situation led to global uncertainty which is reflected in the index prices.

Iron Ore: Iron Ore prices collapsed this month to US $110 per metric ton.

Housing: CoreLogic’s national home value index rose another 1.5% in September, taking Australian housing values 17.6% higher over the first nine months of the year and 20.3% higher over the past 12 months. The annual growth rate is now tracking at the fastest pace since the year ending June 1989.

Although growth conditions remain positive, it is becoming increasingly clear the housing market moved past its peak rate of growth in March when nationally dwelling values increased by 2.8%. Since that time, the monthly rate of growth has eased back to 1.5%.

With housing values rising substantially faster than household incomes, raising a deposit has become more challenging for most cohorts of the market, especially first home buyers. Sydney is a prime example where the median house value is now just over $1.3 million. To raise a 20% deposit, the typical Sydney house buyer would need around $262,300. Existing homeowners looking to upgrade, downsize or move home may be less impacted as they have had the benefit of equity that has accrued as housing values surged.

Retail Sales: The most recent report on Australian retail sales shows a 1.7% fall month-on-month. Also, a fall of 0.7% compared to August 2020.

Agriculture: Gross value of Australia’s agricultural production is forecast to reach a new all-time high of $73.0 billion in 2021-22.

Employment: The Australian unemployment rate has fallen to a new low of 4.5%, however underemployment has increased to 9.4% and monthly hours decreased by 66 million hours.

UK Employment: The UK unemployment rate was at 4.6%. 0.3% lower than the previous quarter.

Exchange Rate: The Aussie dollar fell slightly against the American dollar, at $0.721, and held steady against the Euro at $0.623.

Consumer Confidence: The Westpac-Melbourne Institute Index of Consumer Sentiment increased by 2.0% to 106.2 in September from 104.1 in August. The resilience of consumer sentiment in a period when Australia’s two major cities have been locked down and the economy has been contracting is truly remarkable. The Index is still comfortably above the reads seen over the five years prior to the pandemic and is only 0.9% below its June print just prior to Sydney’s move into lock-down.

Covid: As of 29th September, 27,750,501 vaccine doses were administered nationally. In terms of covid disaster payments 3.71 million claims have been received. With 2.05 million individuals being paid a total of $9.11 billion AUD. Globally there is 2.69 billion people that are fully vaccinated representing 34.5% of the global population.

Is it in the consumers best interest to keep rates low?

Interest rates around the world have fallen to unprecedented lows, currently, there is a record $US15 trillion worth of government, corporate and other bonds trading at negative interest rates. The ECB`s current policy remains at its record low of -0.50% while Japan`s policy rate is at -0.10%, if we roll back the clock to 4 or 5 years ago, such interest rates would have been unheard of.

The low interest environment has very much become normality for the everyday Australian with the deposit rate sitting at 0.10% since November 2020. Having interest rates this low can be great in an attempt to stimulate the economy. Such a tactic is often employed shortly after retractions in economic growth to reinstall confidence back into the community. This is especially great for homeowners as it will reduce their monthly mortgage payments. Similarly, prospective homeowners might be enticed into the market due to cheaper costs. A very significant factor in the recent property boom that can be seen across Australia today. Furthermore, this also means that people are able to borrow more, which in turn spurs demand for household goods. As well as allowing businesses to make larger purchases to boost their capital. This seems great! However, with positives there are always negatives.

If interest rates are kept low for a sustained period of time, then investment returns will also be affected. Anyone putting money into a savings account or similar vehicle won’t see much of a return during this period of monetary policy. Very much a Keynesian theory of economics – governments should increase spending and lower taxes when faced with a recession even in a high deficit environment, in order to create jobs and boost consumer buying power.

The RBA have laid down a marker for a 2.5% inflation target and have stated that they will not change the cash rate until this target has been met. If this is the case, we should take a deeper look into the current inflation forecasts to better understand when this rate could be met.

The Governor of the RBA Phillip Lowe has stated consistently that he does not believe there will be an increase of the cash rate until 2024. He strengthened this statement by raising the stakes in terms of his inflation guideline. “it won’t be enough for inflation to just sneak across the current target of 2-3% for a quarter or two. We want to see inflation around the middle of that target and have reasonable confidence that inflation will not fall below the 2-3% band again”.

By December 2023 Phillip Lowe expects the inflation rate to have reached 2.25% the unemployment rate to have reached 4% and wages growth at 2.75%. This forecast would anticipate the 2.5% inflation target to be met by mid-2024, implying any policy response to interest rates to be altered in Q3-Q4 of 2024. The current rationale behind the RBA`s inflation target is unclear and not in line with other developed economies. The US federal reserve, the ECB and the Bank of England all are targeting 2% whilst the Bank of Canada and Reserve Bank of New Zealand are targeting a 1-3% target with a 2% mid-point. By reducing the target between the 1-3% range rather than the current 2-3% it would recognise the structural changes in our economy since 1992, when the target was first adopted and aligned Australia with other central banks around the world. 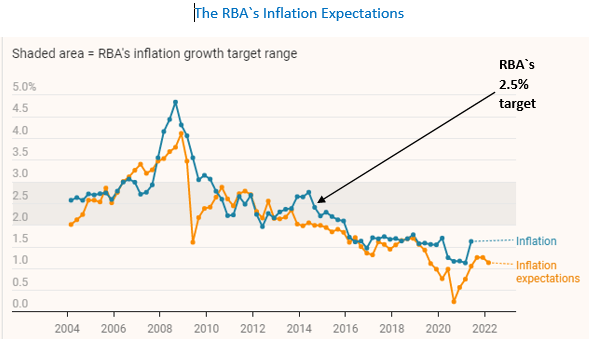 As we can see from the graph above a 2.5% inflation target has not been met since early 2014. Getting back to this level will require a resistant and COVID free economy. But with the current prices especially in commodities such as silicon and coal booming to all-time highs and the supply-side shortages we are currently experiencing, it is hard to think that inflationary pressure will be staying away for long. The graphs below shows the price of Australian thermal coal and Shanghai Silicon spot prices. Such news would be enough to scare even the hardest of inflation sceptics. 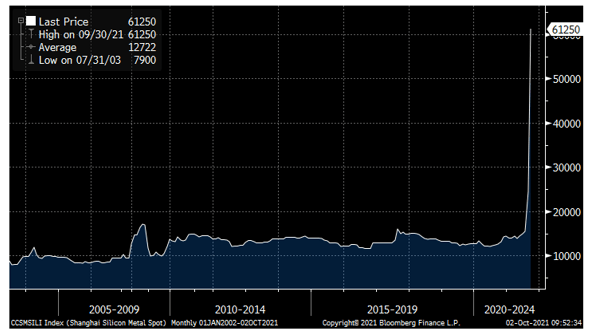 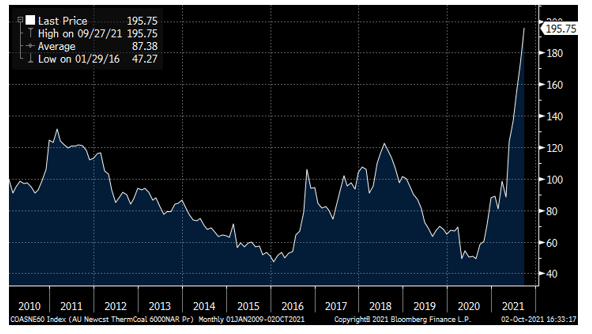 Recent comments from Bill Evans the highly respected chief economist at Westpac expects interest rates to rise much earlier than the target set by the RBA. On June 18th they predicted the first hike will be in Q1 of 2023. Reaching 0.75% by the end of 2023 and peaking at 1.25% by the end of 2024.

It is expected that the lift in wages growth will be a key indicator to boost inflation through 2022. Bill Evans believes that the governors 2.5% inflation target will be met by December 2022. Achieving this target much earlier than first expected would allow the Governor to avoid the dangerous prospect of the impact on asset markets to withstand four consecutive years of a 0.1% cash rate.

It may be sensible to understand that the comments from the RBA over interest rates may be more political than economical. If inflation was to increase too much this could put a lot of pressure on assets and the stock market, causing the economy a different type of problem. Getting this balance right will be how the government is judged especially in the current environment. Such as, trade pressures from China, the Evergrande debacle, COVID-19 and the vaccination roll-out, the property price boom the list goes on. But in terms of interest rates, the question of interest rates rising is when not if.

130 countries and jurisdictions that represent more than 90% of global GDP have joined a new two-pillar plan to reform current international taxation rules, this will ensure multinational corporations are paying their fair share of tax wherever they may operate.

This framework is significant as it updates a century-old international tax system, which no longer serves the purpose of the new digital and globalised economy. The new system will aim to ensure that large Multinational Enterprises pay tax where they operate and earn profits, while adding more stability to the international tax system.

Pillar One – Will ensure a fairer distribution of profits and taxing rights among countries with respect to the largest MNE`s. It reallocates some of the taxing rights from the MNE`s home countries to the markets in which they have business activity and earn profits, regardless of whether a physical presence is there or not.

Pillar Two – Will put a floor on competition over corporate income tax, this will be achieved through the introduction of a global minimum corporate tax rate that countries can use to protect their profit bases.

It is expected under Pillar One that taxing rights on more than 100 billion USD of profits are expected to be reallocated to their rightful market jurisdictions each year. Under Pillar Two with the introduction of a minimum tax rate of 15% this is expected to generate around 150 billion USD in additional global tax revenue per annum.

Between 2000-2018, a collection of US companies accounted for half of all foreign profits spread across seven low-tax jurisdictions: Bermuda, the Cayman Islands, Ireland, Luxembourg, the Netherlands, Singapore and Switzerland.

OECD Secretary-General and former Australian Minister for Finance Mathias Cormann quoted. “This package does not eliminate tax competition, as it should not, but it does set multilaterally agreed limitations on it. It also accommodates the various interests across the negotiating table, including those of small and developing economies. It is in everyone’s interest that we reach a final agreement among all Inclusive Framework Members as scheduled later this year”.

Under the proposed tax deal, countries would have to drop or refrain from national taxes in favour of the single global approach, in theory ending the trade disputes with large countries like the US and China.

The remaining elements of the framework, including the implementation plan will be finalised late next month. With implementation expected as early as 2023, depending on the amount of action taken up at national level. Countries would enact the minimum tax requirement into their own laws. Other parts could require a formal treaty. No matter how this plan continues to develop, the continued sense of bipartisanship between the member countries can only be seen as a positive. How effective this strategy will turn out to be, only time will tell.