Iron Ore: Iron Ore continued to rise strongly to US $204 per ton.

Housing: Housing markets nationally continued to surge in May with CoreLogic’s national Home Value Index up 2.2% over the month, still under the 32-year high recorded in March when values surged 2.8%. The continued growth and shortened supply are pushing prices higher and limiting new entrants into the market.

CoreLogic’s research director, Tim Lawless, says the fundamentals driving strength in the housing market remain in place. “The combination of improving economic conditions and low interest rates is continuing to support consumer confidence which, in turn has created persistently strong demand for housing.”

Total property listings across Australia dropped 6.3% in the month to 245,953 in May, but the yearly contraction was even more severe, with listings down 19.2% in the space of just 12 months, latest figures from SQM Research revealed.

Exchange Rate: The Aussie dollar maintained value against both the American dollar, at $0.774, and the Euro at $0.634.

Consumer Confidence: Westpac’s Melbourne Institute recorded a fall of 4.8% in consumer sentiment following three consecutive increases of 11% in the three months prior. This has still left the index up 28.5% on May last year when coronavirus lockdowns were in full force. The index reading of 113.1 was still the second highest since August 2010 showing confidence is still positive after the Federal Budget was announced, which may have been a factor in the slight decline.

Business Conditions: The ABS reports that 78% of all surveyed companies reported either no change or an increase in revenue during May, unchanged from April. Businesses reported an increase in the number of employees at 9% slightly under the expected increase amount of 10%, echoing encouraging unemployment figures and record-high numbers of new job listings. 20% of businesses have stopped accessing at least one support measure since March, the Government wage subsidies take the largest portion of that at 17%.

Purchasing Managers Index: Rather than measure an economy directly, a PMI measures the business activity that helps drive it. A PMI above 50 indicates an expanding market, while a PMI below 50 indicates a contraction. The Australian PMI has risen again to 61.8, while the US PMI has risen slightly from 60.7 in April to 61.2 in May.

Covid: 171 million infections have been recorded by the end of May, resulting in 3.7 million deaths. The daily average has fallen from 884,000 a day in April to 516,000 in May. 181 countries have started vaccination campaigns, with 846 million people receiving at least 1 dose.

Illawarra’s Decentralisation of the workforce

The emergence of Covid-19 has been the catalyst of a major expansion in remote working across the world and the Illawarra is no exception. Tremendous practical and technological barriers had to be overcome in the early days of 2020’s voluntary isolation and quarantining orders. Now that many of these barriers have been removed and thousands of businesses and workers have had their unplanned experiment with remote working, an increasing number of people are looking to hybrid working models as the future for the Illawarra area.

A hybrid work model, where some tasks are performed at home while others are completed from an office or job site, are more practical in some industries than others. Global research indicates that employees in finance, insurance, management, and professional services can effectively complete between 62% and 76% of all tasks remotely. On the other hand, only 7% to 15% of tasks in construction, the retail and health services industries, and agriculture can be completed remotely.

Given our high commuter workforce, relative affordability of housing and natural amenity, our local region is uniquely suited to this type of employment model. Simple analysis conducted by Deloitte’s highly respected Access Economics team indicated that 38% of our current workforce could work entirely from home. Demand for this type of work model is growing on the side of employees, particularly those commuting to the Greater Sydney region. Surveys of the region indicate commuters have a preference to work from home three to five days per week, while non-commuters prefer two to three days working remotely.

The benefits from this type of arrangement flow both ways. Employees benefit from improved work-life balance, especially those workers that commute, while employers’ benefit from reduced absenteeism, increased employee engagement and an uplift in productivity. This uplift in productivity can be significant, with an average uplift of 16% reported amongst non-commuters and an even larger 22% reported by commuters.

The shift towards remote work also brings an economic boost to the region. Commuters indicate they spent an additional $5.63 per day at local businesses when working from home during COVID-19. Extrapolating that result across the additional time worked from home by commuters in the future would induce an additional $4.1 million in local spending per annum.

If you are a business owner and would like to enable more hybrid work, Deloitte highlight several key areas of your business to review: 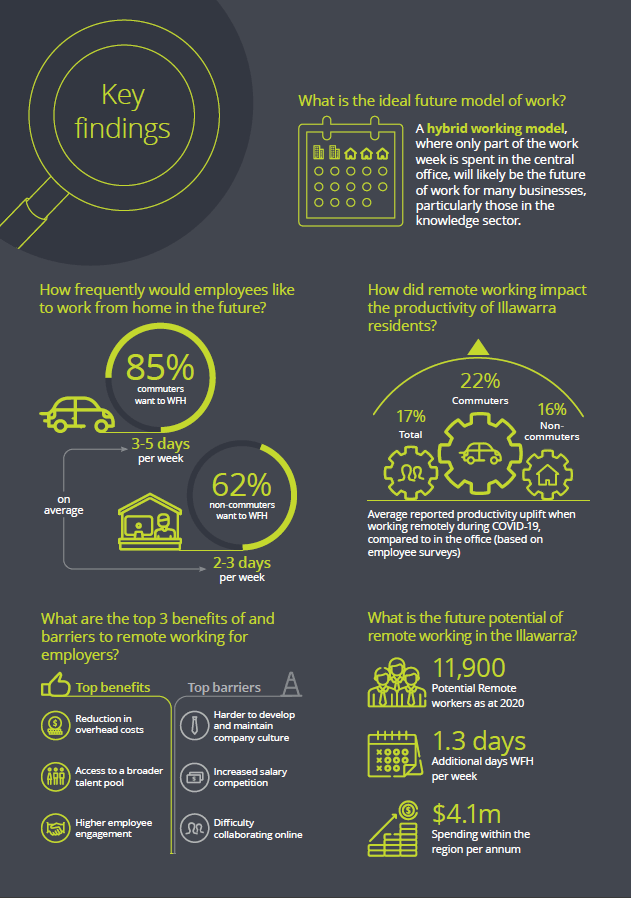 Semiconductor Shortage due to Weather, not Covid

We live in a digital era, surrounded by computerised systems making our lives more comfortable in countless tiny ways. From the car you drive to the grocery store, to the stock management system that ensures there is fresh food available when you get there, computers have infiltrated every part of modern life. So, what does this have to do with frosts in Texas and a drought in Taiwan?

Because computers are integrated into so many products, when the supply of these components is disrupted, it affects the production of tens of thousands of seemingly unrelated items. The world is currently experiencing an extreme shortage of high-performance semiconductors, though this shortage has more to do with the weather than the pandemic that many assume to be the cause. High end silicon requires precision beyond human hands, and the robotic production lines that are required for manufacturing are immune to this virus.

When unseasonably cold weather caused the collapse of the Texan energy grid in February, it halted production by NXP (one of the world’s largest automotive chip makers), Samsung (the world’s second largest semiconductor maker) and Infineon (top 10 global semiconductor maker), with facilities remaining offline for weeks.

To give context to the scale of the disruption, Herbert Diess, board chairman for Volkswagen described the business as being ‘in crisis mode’ due to the inability to source appropriate silicon parts. The shortage has forced GM, the 113-year-old automotive giant, to remove a fuel economy enhancement system from it’s most popular vehicles. Dodge has removed the intelligent rear mirror from its vehicles and Nissan is removing the navigation systems from its new cars. Whilst Ford Motor Company anticipates a $US 2.5 billion ($3.2 billion) chip shortage cost.

Texas is important to silicon manufacturing however, Taiwan is the king, with more than 50% of the world’s semiconductor manufacturing taking place within its borders. Taiwan is also in the middle of a severe drought. Semiconductor manufacturing is an extremely water intensive process. TSMC for instance, uses 156 million litres of water a day to produce chips. Water supply is not usually an issue in a country that experiences three to four typhoons a year, but 2020 did not see any, for the first time in more than half a century. With water rationing in force for households and businesses, it looks like the shortage will continue to worsen.

The number of products affected is also likely to rise over the coming year, as manufacturing companies make decisions about which type of chips to prioritise given the limited water resources available. Samsung has announced that television and appliance production is being disrupted, and they may skip the launch of the next Galaxy Note smartphone.