Global: The S&P500 index rose 3.7% in March to improve on a disappointing quarter.

Gold: Spot price for Gold continued to rise, ending the month at $1,933.

Sydney’s growth rate is showing the most significant slowdown, falling from a peak of 9.3% in the three months to May 2021, to 0.3% in the first quarter of 2022. Melbourne’s housing market has seen the quarterly rate of growth slow from 5.8% in April last year to just 0.1% over the past three months.

CoreLogic’s research director, Tim Lawless, says while the monthly rate of growth was up among some cities and regions, there is mounting evidence that housing growth rates are losing momentum.

Retail Sales: Retail sales in Australia increased by 1.8% m/m. February’s result saw retail sales hit their second highest level on record after November 2021, amid lower COVID-19 cases and further easing of curbs. Sales at cafes and restaurants gained the most (9.7% vs -0.5% in January), as businesses overcame staff shortages and closures from prior months to return to a more normal situation.

Bond Yields: Both the Australian and US government 10-year bonds continued to rise finishing the month at 2.79% and 2.35% respectively.

Exchange Rate: The Aussie dollar maintained value against both the American dollar at $0.748, and the Euro at $0.670.

US Employment: The U.S. economy added 431,000 nonfarm payroll jobs in March 2022, as the unemployment rate dropped to 3.6%. “Notable” job gains continued in leisure and hospitality, professional and business services, retail trade, and manufacturing.

Consumer Confidence: The Westpac-Melbourne Institute Index of Consumer Sentiment fell by 4.2% to 96.6 in March from 100.8 in February. This is the weakest point since September 2020, which is also the last time the index was below the 100-level indicating that pessimists outnumber optimists. The survey was conducted in the week of February 28 to March 4. It would have captured most of the response to the south-east Queensland and Northern NSW floods.

Business Conditions: The ABS reports that 39% of all surveyed companies expected the price of their goods and services to increase more than usual. 40% of all businesses also reported an increase in operating expenses over the last month compared to just 24% over the same period 12 months earlier. Almost one in five of employing businesses had staff unavailable due to COVID-19.

Purchasing Managers Index: Manufacturing PMI in Australia increased to 55.70 points in March from 53.20 points in February 2022. It was the highest reading since July 2021. Five of the six manufacturing sectors reported positive trading conditions, with buoyant conditions reported by manufacturers in the machinery & equipment, building materials, and TCF, paper & printing products sectors. Readings above 50 points indicate expansion in activity, with higher results indicating a faster rate of expansion.

The recent war in Ukraine and a further slowdown in the Chinese economy linked to COVID-19 has introduced new complications for many central banks trying to gently tighten monetary policy without causing a recession. Many central banks globally have had a poor record of avoiding a recession when there has been an interest rate rise. The mix of geopolitical events has disrupted the task even further. Since the 1970`s there has been 8 tightening cycles in the US and 5 in the UK, while the European Central Bank has embarked on three since it was formed two decades ago, with the combined 16 cycles, 13 have ended up in a recession. Neil Shearing from Capital Economics stated that “history shows that the path to a soft landing is narrow and the inflation shock from the war in Ukraine has narrowed it further”. The below graph shows this trend. 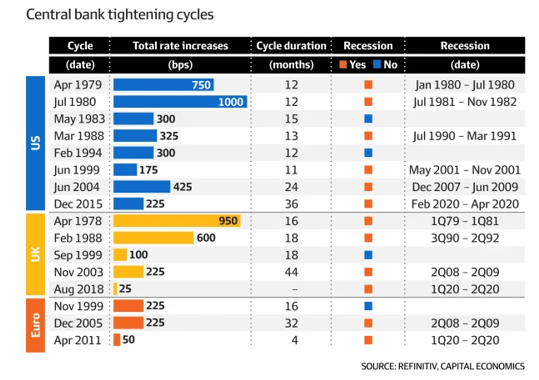 The aggressive rate hikes that are now being forecast by Fed officials have raised concerns that by focusing on inflation, policymakers could end up tipping the economy into recession.

Commodity prices exported by Russia and Ukraine have surged in the past few weeks, putting increased inflationary pressure on consumers. Europe is particularly vulnerable to the economic conflicts given its regional proximity and high reliance on Russian exports.

The Russian Federation and Ukraine are among the most important producers of agricultural commodities in the world. In the cereal sector, their contribution to global production is especially significant for barley, wheat and maize. Combined, the two countries, on average and respectively, accounted for 19, 14 and 4 percent of global output of these crops between 2016/17 and 2020/21.

The Russian Federation stands out as the top global wheat exporter, shipping a total of 32.9 million tonnes of wheat and meslin, or the equivalent of 18 percent of global shipments. Ukraine stood as the sixth largest wheat exporter in 2021, exporting 20 million tonnes of wheat and meslin and with a 10 percent global market share. Worryingly, the resulting global supply gaps caused by these shortfalls could raise international food prices by 9 to 22 percent above their already inflated price levels. 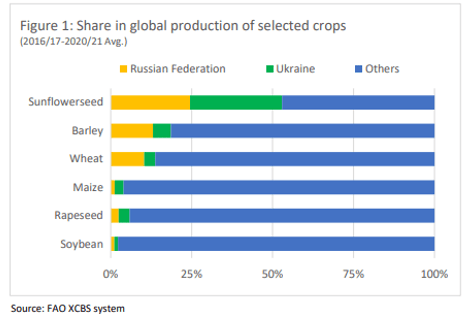 Energy prices, notably those for natural gas and crude oil, have seen swift and substantial increases, largely caused by the conflict. With crude oil prices exceeding USD 126/bbl on 8 March 2022, an increasing number of feedstocks could again become competitive as inputs into the energy sector add upward pressure on feedstock prices, notably on maize, sugar and various vegetable oils. The added demand will only diminish when feedstock prices have risen far enough to become too expensive. The additional demand will eventually come to a halt when the energy parity price of an agricultural feedstock is reached and the agricultural feedstocks price themselves out of the energy market.

The latest release from the Australian Bureau of Statistics shows some interesting characteristics about Australia’s population trends. After recording its first population decline since World War 1 after the first spout of lockdowns were announced around the country, Australia’s population numbers have returned to growth. However, at a much lower rate than has been seen historically. Most recent population statistics reported by the ABS showed that for Q3 of 2021, Australia’s population grew by a mere 0.05% to a total of 25.75 million. Much of the diminishing growth can be attributed to record low (NOM) Net Overseas Migration, which fell by 20,000 over the same period, during a time when Australia’s international borders were largely still closed.

The recent results put Australia’s current population up by 68,900 ahead of where it was 12 months prior. Growth of just 0.3% with NOM contracting by 67,300 people. 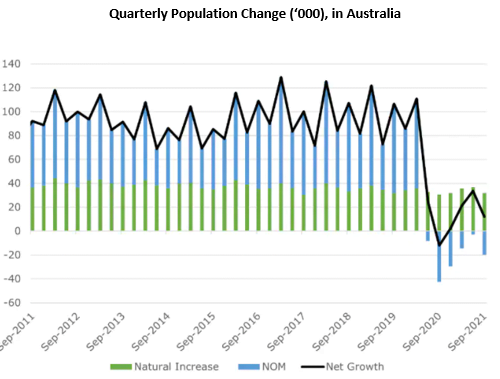 We are also getting a glimpse into the potential impact that easing border restrictions will have on overseas arrivals. Provisional estimates for February 2022 show that although short-term international arrivals have lifted, they are still a fraction of what they were before the pandemic hit. The month saw 272,000 short-term arrivals – only 15% of the level seen in the corresponding month in 2019.

Overall, the lack of flow of people from overseas continues to affect the domestic labour market, showing up as significant skill shortages across many sectors. Given both the lack of overseas arrivals and Australia’s ageing population, the working age population fell by almost 84,000 through 2020-21.

While international migration is doing little to support population growth, internal migration has provided a much-needed boost for some states and territories. In the year to September 2021, Queensland’s population grew by 57,500 (1.1%), where Net Interstate Migration (NIM) contributed almost 41,000 people. This is in stark contrast to New South Wales and Victoria, with both states experiencing large population losses as people moved out. This large flow of migration can be largely correlated to the severe spike in house prices in major Australian cities such as Sydney and Melbourne, causing people to cash up and move interstate. 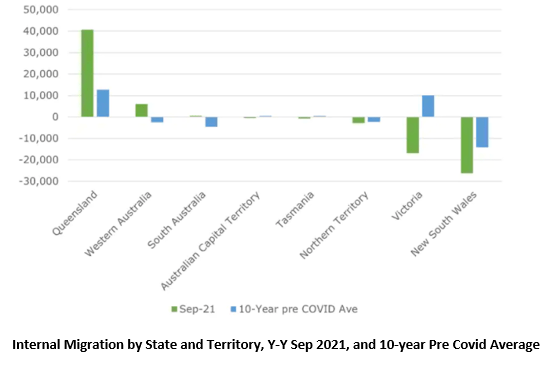 When compared to what we’ve seen previously, this is an extraordinary result for Queensland, with NIM contributing almost three times what it had across the 10 years prior to the onset of COVID.

The result has primarily come at the expense of Victoria which, up to the beginning of the pandemic in early 2020, was experiencing a strong rate of NIM population growth. The significant decline in the state’s internal migration has been a culmination of larger than usual outflows and smaller inflows, with inflows falling from 87,000 to 66,000 and outflows rising from 68,700 to 84,000 in the 2015-16 and 2020-21 financial years respectively.

Although a negative NIM has been the norm for New South Wales over recent history, it has jumped to a level well beyond what was seen previously. The decrease in NIM is especially problematic as, without the usual large inflows it sees from overseas to offset this, the state’s population growth is now just slightly bigger (up only 0.2% over the year).