There was a very interesting article in one of the mainstream papers recently on the increasing international tensions over fishing rights. The cause of these tensions is again something that Australia takes for granted, food security. In this case it was a serious altercation between our most populous northern neighbour Indonesia and the main instigator of aggression in the South China Sea being China. The incident which occurred in December last year did not get wide scale press in Australia due to the severity of the bushfires that were ravaging large parts of Australia. China had sent a fleet of 63 commercial fishing vessels with 4-armed coast guard vessels as escort into Indonesia’s Exclusive Economic Zone in an area known as the Natuna Sea. 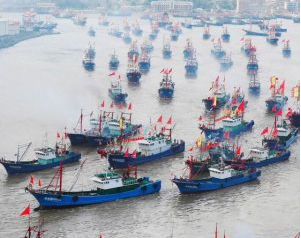 In Indonesia, fish accounts for more than 50% of total protein intake and the fishing industry employs some 12 million people. The loss of fisheries for such countries could contribute to violent extremism, political instability and potentially even large-scale population movements. The scale to which these 63 commercial fishing vessels could deplete Indonesia’s fish stocks is obvious and as a country of 268 million people who have genuine food security issues, this event was met with an iron fist.

Australia is blessed with a relatively small population sitting on a massive land mass of 7.7million square kilometres with a massive 59,736 kilometres of coastline. The control the Australian government has extends well beyond our immediate coastline. Australia’s “Exclusive Economic Zone” extends 200 nautical miles (370km) beyond the coastline and is regulated by the United Nations Convention on the Law of the Sea or UNCLOS. 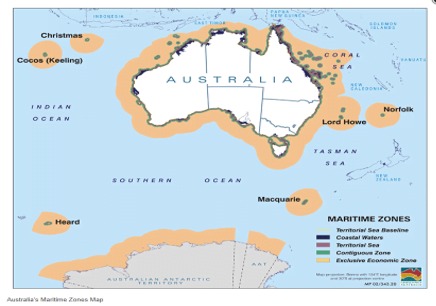 When the same 200km EEZ is applied in the South China Sea, things get a little vague. With Japan, China, Vietnam, Malaysia, Taiwan, Thailand, Singapore, The Philippines, Brunei, and Indonesia all having rights to a defined 200km EEZ, and given the importance of the sea as a commercial shipping route, fishing industry and undiscovered oil & gas reserves, all bordering countries are sensitive to any incursions. In 2009, in a submission to the United Nations, China lodged a map of the South China Sea with a vaguely defined 9 dash line, which comprised most of the area and overlapped with the legitimate EEZ boundaries of the other coastal countries in the region.

The major islands and reef formations, being the Spratly Islands, Parcel Islands, the Natuna Islands and Scarborough shoal, have in the last 10 years become the target of significant Chinese development with land reclamation, key military infrastructure development, and troop deployments. In a report to congress titled US-China Strategic Competition in South & East China Seas: Background & Issues for Congress on 23rd June 2020, it noted “Chinese domination over or control of its near-seas region could help China to do one or more of the following on a day-to-day basis:

The US is concerned that China’s actions will challenge the existing principle of peaceful resolution to disputes between the affected nations and that it opposes the “might makes right” approach which China is adopting.

Fishing rights is the first and obvious issue for many of the surrounding countries. With China’s almost insatiable demand for fish and the South China Sea accounting for 15% of the global catch in 2015, control and exploitation of these seas is critical. 59 million people work in the fishing or aquaculture industry with 85% of those in Asia according to United Nations Food & Agriculture Organisation, and over 3.5million fishing vessels, the pressure on the fish stocks in the South China Sea is enormous and possibly unsustainable. With fishing boundaries tied to agreed geopolitical boundaries, and endorsed by UNCLOS, the actions by China in the region could be concern for all.

China of course does not limit itself to the South China Sea. It has raised the ire of many African nations as well as South America while here in Australia, where we have the prized Southern Blue Fin Tuna, illegal fishing is also very actively defended. China has a very small Exclusive Economic Zone relative to their population and in recent times have increasingly looked at other geographic fishing grounds to fill their growing need for fish protein. In this regard Indonesia’s actions against China in December can be seen as being resolute in the defence of international law and is but another significant issue the world faces in these challenging times.