Housing: CoreLogic’s national measure of housing values rose by 1.1% in January, up 10 basis points from the December result, when the national index was up 1.0%. Five of the eight capital cities recorded a modest uptick in the monthly rate of growth, including Melbourne, which had posted a slight decline in values in the previous month. However, the quarterly change continued to soften, reflecting the longer-term trend of slowing growth across most regions of Australia.

CoreLogic’s Research Director, Tim Lawless, notes housing stock is thinly traded during January, and it will be important to monitor the trend as transactional activity picks up

Regional markets have again shown a substantially stronger result for housing values, with the combined regionals index up 1.8% over the month and 6.3% over the rolling quarter. This compares with a 0.8% and 2.6% rise respectively across the combined capital cities over the same periods.

Retail Sales: December retail values were materially weaker than expected, slumping 4.4% m/m. This is likely reflected by a worse than expected hit from Omicron.

Exchange Rate: The Aussie dollar continued to fall against the American dollar, at $0.705, and the Euro at $0.629.

Consumer Confidence: The Westpac-Melbourne Institute Index of Consumer Sentiment fell by 2.0% to 102.2 in January from 104.3 in December. This is a surprisingly solid result given the rapid spread of the Omicron Covid-19 variant over the last month. The 2% decline compares to the 5.2% drop seen in the first month of the delta outbreak in NSW, a 6.1% drop heading into Victoria’s ‘second wave’ outbreak in 2020 and the epic 17.7% collapse when the pandemic first hit in early 2020.

Employment: The Australian economy added 64,800 jobs in December, lowering the unemployment rate to 4.2% from a previously reported 4.6% in November. This is the lowest level of unemployment since August 2008.

US Employment: The unemployment rate is at a 22-month low of 3.9%, a sign the labour market is at or close to full employment.

Agriculture: The gross value of Australia’s agricultural production is forecast to reach a record $78 billion in 2022. This $5.4 billion upward revision from the outlook issued in September is the result of further improvements in domestic growing conditions, downgrades for key overseas competitors driving prices higher, and steep increases in logistics and fertiliser costs worldwide. Prices are at multi-year highs for many agricultural commodities. Many of the factors driving international prices are driven by poor seasonal conditions, so there is considerable uncertainty how long prices will remain at these levels – posing a risk to the forecast values being realised.

Purchasing Managers Index: Rather than measure an economy directly, a PMI measures the business activity that helps drive it. A PMI above 50 indicates an expanding market, while a PMI below 50 indicates a contraction. The Australian PMI fell by 6.4 points to 48.4 points over the summer holiday period (December 2021 and January 2022) from 54.8 in November, pointing to a contraction in the factory sector, amid lower demand over a normally quiet period.

The term inflation can be a dubious matter when reflecting on the state of any economy, many would see high inflation as a negative outcome. But some levels of inflation can be good for an economy’s advancement and sustainability. The term inflation isn’t necessarily good or bad and normally happens in times of transition between economic cycles. For instance, a bout of mild inflation can be good if it is generated by a growing economy and stimulates consumer demand or consumption, but it can quickly be undesirable if it becomes too low or too high and embeds itself into future economic expectations.

We are currently starting to see a spike in inflation which is spooking markets and causing the RBA to rethink its interest rate environment. Many are prepared to wait out the inflationary threat on the basis that it will be more transitory, but until this is confirmed markets may be at the mercy of inflation developments.

Much attention has been focused on Jerome Powell, the head of the US Federal Reserve. After recent comments stating that the US would be “nimble” in responding to inflationary pressures, whilst strongly hinting at a rapid-fire series of rate hikes beginning in March. The central bank is trying to prevent high inflation from becoming a permanent feature of the economy. Prices in December were up 7% in the US from the previous year, the sharpest jump in nearly 4 decades.

“Inflation has persisted longer than we thought, and of course, we are prepared to use our tools to ensure that higher inflation does not become entrenched” stated Mr Powell.

Australia has been seen to have taken a much more dovish stance than their US counterparts, Phillip Lowe has consistently emphasised the Reserve Banks determination to remain patient and hold off raising interest rates until actual inflation is sustainably between 2-3%. 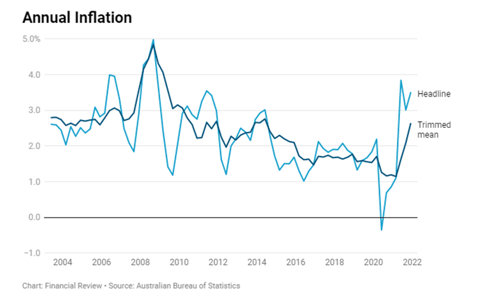 So what can we expect next from the RBA?

On Tuesday the Reserve Bank terminated its $350 billion pandemic bond buying program, citing significant improvements in the economy and inflation running years ahead of their original forecasts. They have still kept the cash rate at its historic low of 0.1% but did upgrade its outlook for unemployment figures to fall below 4% late this year and to around 3.75% by the end of 2023. This has been reiterated by the central bank’s commitment to “maintaining highly supportive monetary conditions” to achieve full employment and keep inflation within the bank’s target range.

Phillip Lowe went on to say that “wages growth also remains modest, and it is likely to be some time yet before aggregate wages growth is at a rate consistent with inflation remaining sustainably within the target range.” A key condition the RBA wants to see moving higher is wages, which has been stated needs to be growing at 3% or more annually for inflation to be sustainably within the target band. In their most recent statement on monetary policy in November the bank forecasts the Wages Price Index (WPI) to be below 3% until December 2023.

Furthermore, Phillip Lowe commented at the National Press Club saying that “If they resolve in one way, then we’ll raise rates, if they resolve in another way it is still plausible that the first increase in interest rates is a year or longer away.” This would indicate that the raising of interest rates this year is a probable scenario based on the economic conditions we are currently facing. However this is not the only one as there are a lot of factors that need to be met first before an increase is seen.

Will Our Housing Boom Last?

After the fastest annual price growth in decades has taken over the Aussie property market, do we now face the prospect of falling house prices that could stay around for years to come. That is if past economic downturns are anything to go by.

Core Logics Tim Lawless says. “Once a market peaks, the typical trend is that values will experience a period of decline. But it’s impossible to know the timing, duration or magnitude of the housing downturn as it depends on so many factors, especially at the moment with so much uncertainty”.

It is usual that interest rates will normalise over several years rather than a rapid return to average levels which should help to cushion the size of any housing downturn, but if credit policies become overly restrictive too soon, it could become amplified.

Another factor that could hurt the housing boom is a return of employees to the office, especially in regional areas. It could even be more detrimental than any small interest rate rises we may see over the next year. Louis Christopher from SQM research, said historically regional markets were less affected by interest rate rises, but more sensitive to changes in local economic trends and housing demand. “The regions are more volatile than the capital cities, simply because they are smaller markets with lower liquidity. It doesn’t take much of a change for there to be a significant change in the market on the ground.”

One of the main competitive advantages for regional areas was their price affordability compared to the larger cities, with this advantage slowly eroding the novelty of moving there may also be diminishing. There are already some regions that are seeing a slowdown in momentum such as the Southern Highlands-Shoalhaven region, which notched the highest annual growth rate in 2021 at 37.7%, it has recently posted a 0.8% drop in its growth rate to 8.7% in the three months ending December.

One of the big changes that we have seen in the property sector is that there are now 3 regional areas that are more expensive than Melbourne: The Illawarra, Sunshine Coast and Richmond-Tweed. Prior to the pandemic there was none.  Finally, the dwelling excess is forecast to increase over the next 2-3 years turning the market away from its current sellers’ market to a buyers’ market. 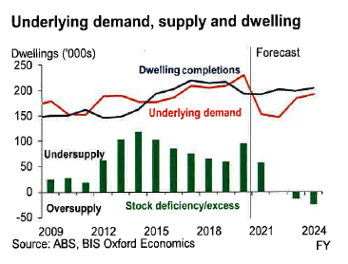 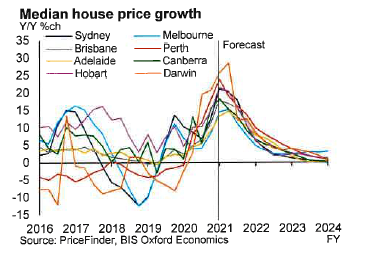 The graphs provided by BIS Oxford Economics provides us with some clarity on the direction the housing market will go in years to come and the slowdown in median housing prices. The main reasons for these current forecasts stem from, increased interest rates, the re-opening of the economy, a reduction in stimulus packages and the reduction in population growth. Price momentum is expected to continue near term but then taper as the higher prices and interest rate increases/ macro-prudential policies reduce overall affordability.