Local: The ASX200 index rose 2.1% in February. The Energy sector lead the way with an 8.6% rise, while the Information Technology sector was the worst performing, down -6.6%.

Gold: Spot price for Gold rose sharply in February to $1,908.

Oil: Brent Oil price rose sharply to US $100.99/bbl. The first time the price has exceeded the $100 mark since 2014. A large contributor to global inflationary pressures.

Previous analysis from CoreLogic shows a strong inverse correlation between movements in the cash rate and housing values, albeit with the strongest correlation based on a lag, but other factors are also likely to influence the trajectory of housing values.

Fixed term mortgage rates have been rising through most of last year, housing is less affordable, credit policy has tightened, and lenders are likely to be more cautious in lending decisions. Additionally, household savings are likely to fall which could take some demand out of the housing market, and advertised inventory is rising, providing more choice and less urgency for buyers.

Retail Sales: January retail sales recovered slightly from its previous month, rising 1.8% m/m. This is a significant upturn from the 12 months prior. Rising 6.4% y/y compared to January 2021.

Exchange Rate: The Aussie dollar maintained value against both the American dollar, at $0.716, and the Euro at $0.648.

Inflation: Consumer price inflation in the December quarter was 1.3% and 3.5% over the year, led by increases in the prices of new dwellings, durable goods and fuel. Underlying inflation has also picked up in recent quarters and is forecast to increase further to 3.25% in mid-2022.

Consumer Confidence: The Westpac-Melbourne Institute Index of Consumer Sentiment fell by 1.3% to 100.8 in February from 102.2 in January. Given that the health disruptions from the Omicron variant have eased and the labour market has strengthened it is surprising that we did not see some improvement in the Index in February. Virus developments do look to have seen an improved assessment of the economy, as measured by the components of the Index that relate to the economic outlook, and confidence in the jobs market.

Employment: The unemployment rate remained at 4.2%, with the participation rate increasing to 66.2%.

US Employment: Total nonfarm payroll employment rose by 467,000 in January, and the unemployment rate was little changed at 4.0%. Employment growth continued in leisure and hospitality, in professional and business services, in retail trade, and in transportation and warehousing.

Purchasing Managers Index: The Australian Industry Group Performance of Manufacturing Index (Australian PMI®) rose by 4.8 points to 53.2 in February, reflecting mild improvements and a rebound into positive territory after a sharp decline in the December 2021-January 2022 report. Readings above 50 points indicate expansion in activity, with higher results indicating a faster rate of expansion.

The Russia Ukraine War – What has happened and what will our world look like tomorrow?

What we know so far

What Sanctions Have Been Imposed

Global dependence on Russian oil and natural gas has proven to mitigate any major upward pressure on commodity prices for now and will likely continue to be the case as western nations deal with the awkward balancing act of looking out for the wellbeing of the Ukrainian people but also the health of their economies. Should commodity prices remain somewhat contained, Australian and US equity markets will likely continue to remain relatively unaffected by the conflict, given the lack of economic ties to Russia.

What can we expect to happen?

Unless Vladimir Putin has a change of heart or the West can do their best to deter him, it appears that Mr Putin is willing to kill as many people as necessary and destroy as much of Ukraine’s infrastructure as possible to erase Ukraine as an independent state. This sort of action could lead to some of the largest war crimes seen since the devolvement of the Nazi party. The new globalised world has never had to deal with an erratic leader whose country landmass spans over 11 time zones, is one of the world’s largest oil and gas producers and possesses a large arsenal of nuclear warheads.

Intervention against someone this hostile, risks igniting the first war in Europe involving nuclear weapons. You can understand why global leaders are being sheepish. Putin believes in the idealism of a “Russian World” where Ukrainians and Russians are one people. To realise such a vision Putin believes it is his right to challenge the rules-based system, in which things that a country desire is not taken by force. If anyone tries to get in his way or attempt to humiliate the Russian leader, he has categorically stated that he will not hold back.

This scenario is likely to take some time, it will only happen if somehow the Ukrainian military and people manage to hold off against the Russian attack long enough that the economic sanctions start to have a deeply wounding effect on the Russian economy.

This would suggest that in return for a ceasefire and withdrawal of Russian troops, Ukraine’s eastern cities now under de facto Russian control would be formally handed over to Russia, while Ukraine would vow never to join NATO. At the same time the US and its allies that had previously held sanctions against Russia would be required to lift them.

This scenario does remain unlikely as it requires Putin to dismantle himself from his political pedestal, whilst paying a hefty price in terms of economic disruption and the deaths of Russian soldiers.

A scenario that would seem the least likely but one with the best global outcome is that the people of Russia demonstrate as much bravery and commitment to their own freedoms as the Ukrainian people have shown to their own. Many Russians would be starting (or already have) to worry that if Putin is their leader, they have a very grim and dismal future. Thousands have already taken to the street to protest this war, doing so at immediate danger to their lives.

The international push back is immense against the Putin regime, as it should be. From culture to commerce, sports to travel, the world is shunning Russia in a myriad of ways to stand up and protest. Then there is the “Putin tax” that every Russian will have to pay indefinitely whilst Putin is in charge. The mounting sanctions that are being placed on Russia will have a significant effect on Russian lives.

The Russian central bank has recently been forced to raise interest rates in one day to 20% just to try and encourage people to hold Rubles, even then the currency dived 30% against the US dollar, now worth less than 1 US cent.

Only time will tell what will happen with this war, we all hope a resolution is round the corner, but nothing would surprise us after the past few unpredictable years.

How Important Are Environmental, Social and Governance (ESG) Concerns When Investing?

ESG means using environmental, social and governance factors to evaluate companies and countries on how far advanced they are with sustainability. Once companies collate enough data on these metrics, they can be integrated into the investment process when deciding what equities or bonds to buy.

The environmental factors include the contribution a company or government makes to climate change through greenhouse gas emissions, along with waste management and energy efficiency. Given renewed efforts to combat global warming, cutting emissions and decarbonising are becoming ever more important.

The social factors include human rights, labour standards in supply chains, exposure to illegal child labour and adherence to workplace health and safety. A social score rises if a company is well integrated with its local community and therefore has a ‘social license’ to operate freely.

Finally, the governance factors refer to a set of rules or principles defining, rights, responsibilities and expectations between different stakeholders in the governance of corporations. A well-defined corporate governance system can be used to balance or align interests between stakeholders and can work as a tool to support a company’s long-term strategy.

What does the future hold?

Amid COVID disruptions ESG has become increasingly important for many Australian CFOs and interested parties. They recognise that investors, customers and staff members all want some sort of action on ESG.

Deloitte Access Economics have put together research around this area and can show how ESG is becoming more influential in investors thought process. 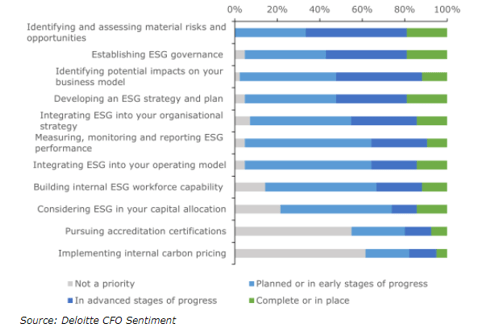 Further, a lack of capability and a lack of resources are both listed as key barriers to ESG efforts. Some 60% of surveyed CFOs either personally drive, co-drive ESG or have oversight of it in their organisation, but of this group only 22% feel confident in doing so. 56% of CFOs are somewhat confident and working on actively upskilling. That leaves a further 22% who don’t feel they have the skills, capability, or support they need to contribute meaningfully on ESG, despite understanding the urgency of action.

There is a changing demographic, a new generation of investors who feel quite strongly about how their money ought to be managed. Investors can align their personal values with their investments, given an ever-increasing range of suitable options.

Furthermore, poor performers within the market can adapt and evolve through smarter capital allocation and changes to corporate behaviour. Companies can make substantial changes and be viewed in a fresh light when they change their ways. ESG investing is not set in stone.

The importance of ESG is very much in the infancy stage, but companies and investors must get up to date with this area before they get left behind the pack.