Local: The ASX200 rose 2.5% for August, completing an 11th consecutive month of gains for the Australian benchmark. Led by roaring gains in information technology.

Housing: According to CoreLogic’s national home value index, dwelling values rose 1.5% in August; a rate of growth that is still well above average, but the lowest monthly rise since January. The lift in housing values continues to be broad-based, with every capital city, apart from Darwin (-0.1%) recording a rise in values throughout the month, although it is important to note CoreLogic has withheld the Perth and Regional WA index results pending the resolution of a divergence from other housing market measurements in WA.

Housing prices have risen almost 11 times faster than wages growth over the past year, creating a more significant barrier to entry for those who don’t yet own a home. Lockdowns are having a clear impact on consumer sentiment. The August update takes Australian housing values 15.8% higher over the first eight months of the year and 18.4% above levels a year ago. In dollar terms, the annual increase in national dwelling values equates to approximately $103,400, or $1,990 per week. In comparison, Australian wages are rising at the average annual rate of 1.7%.

Exchange Rate: The Australian dollar (AUD) fell slightly again this month against major currencies, $0.734 and $0.62 against the US dollar and Euro respectively.

Employment: The unemployment rate (seasonally adjusted) has fallen to as low as 4.6%, however this figure can be offset by an increase in underemployment to 8.3% and monthly hours worked decreasing by 3 million hours.

US Employment: Private payrolls rose just 374,000 for the month, well below the Dow Jones estimate of 600,000 though above July’s 326,000, which was revised downward slightly from an initial 330,000 reading. Most of the new jobs came from leisure and hospitality, which added 201,000 positions in a somewhat hopeful sign that an industry beset by a labor shortage continues to recover.

Car Sales: New vehicles sales climbed by 33% in August in Australia compared with the same month last year even though the extended lockdown in Sydney constrained sales in New South Wales.

Purchasing Managers Index: Rather than measure an economy directly, a PMI measures the business activity that helps drive it. A PMI above 50 indicates an expanding market, while a PMI below 50 indicates a contraction. The Australian PMI fell dramatically this month to 51.60 falling from 60.8 in July. This was the first fall in the PMI rate since November 2020.

Covid: As at 30 August 2021, a total of 52,612 cases of COVID-19 have been reported in Australia, including 1,002 deaths, and approximately 18,039 active cases. However, in more positive news over 70% of the NSW eligible population has received at least one vaccination dose, passing the 7 million mark. 40% of the world population have received at least one dose of a COVID-19 vaccine with 5.38 billion doses being administered worldwide.

Many people might wonder what the business of government is. Is it roads and rail? Health and education services? Economic Regulation? All of them are correct but only a partial element of the story.

With the depth of the budget deficit hole getting bigger it is vital for governments to not only deliver for people today but also for future generations and move away from leaving a hefty bill. To his credit this is precisely what NSW Treasurer Dominic Perrottet has tried to achieve. The introduction of the NSW Generations Fund (NGF) was to create a rainy-day fiscal buffer after the NSW budget was running a $4 billion surplus back in 2018. However, jump to the modern day and our muddled COVID economy, is this really the right time to be leveraging taxpayers money on stocks and other high risk strategies? To put this into context it can be seen to have similarities to the “moral hazard” Macquarie Bank endured during the GFC, when it borrowed $13 billion of government-guaranteed money and embarked on a huge ‘carry trade’ by gambling this cash on foreign junk bonds. The premium yields on these securities came with the risk that had they defaulted, it could have blown up the bank, leaving taxpayers to foot the bill.

By funnelling money into the NGF they are hoping that by punting on riskier strategies that earn more than 4.5 per cent above inflation the NGF could outperform the cost of NSW`s debt. Taken to its logical extreme, this process could enable the government to become an investment business. A government however is not an investment business, and we were not supposed to be doing this as a money making scheme. The NSW Treasury appears to be gleefully taking advantage of the Reserve’s largesse. Its plan is exquisitely tailored to exploit the cheap debt and ballooning asset prices that more than a decade of central-bank-led quantitative easing has ignited. Yet the problem with all pro-cyclical strategies is that good times never last. Cycles end.

At its initiation the NGF received $3 billion of budget surplus by Perrottet, combined with $7 billion from the sale of the first half of WestConnex. With the second half being sold next month, reaping NSW taxpayer as much as $13 billion. All of which will be put into the NGF. It is stated that any proceeds put into the fund will be used to fund mass infrastructure projects over the state such as the Metro West train line from Sydney to Parramatta. However, to this day it is unclear if it will pay for even one cent. Even more remarkably, Perrottet`s advisers want to direct more than $10 billion of taxpayer revenue to the DRF (Debt Retirement Fund) a subsidiary of the NGF, and $20 billion to a range of investment funds with TCorp (NSW investment and debt issuance agency). Due to this, the DRF is perversely contributing to greatly lifting taxpayer debt, not reducing it, because of the revenue it is hijacking at a time when NSW budget is deep in the red. This is exacerbated by the fact that NSW has yet to use any of the DRF`s $15 billion, which will rise to more than $27 billion once the second half of WestConnex is sold, to pay for the unprecedented $108.5 billion of infrastructure Perrottet has committed to build. Because the former fundies and bankers running NSW want to keep all this money in TCorp`s funds, NSW has to raise more debt to replace it.

To make things look even worse, since 2018, the only people profiting from the NGF appear to be the fund managers running it. TCorp is a private for-profit entity that made a whopping $75 million in profit in 2020. TCorp has a theoretical interest in keeping all the money in the NGF as without this money TCorp would lose out on substantial fees. TCorp’s 184 executives were paid $53 million in 2020, and can earn significant bonuses, strongly influenced by TCorp’s profitability. There are many hands in the till capturing total fee payments of $150 million per year on the NGF`s $15 billion, reaching over $270 million once the WestConnex is put into the kitty. It seems preposterous that NSW taxpayers should load up on equities when valuations are at a 100-plus year high and interest rates are at record lows, only adding fuel to the uncertainty fire.

Unlike the major banks, super funds and insurers, no one can stop Perrottet from taking absurd risks if he wishes. State governments do not have to answer to any prudential regulators. For example, if the treasurer was running a superannuation fund, he wouldn’t be allowed to use debt to buy shares, this is illegal. But due to the rarity of state government-run funds, the treasurer sets his own rules. Indeed, lacking any legal obstruction. But Perrottet is not a hedge fund manager. He is a public servant. His job is to steward NSW’s finances responsibly. When he borrows $10 billion, he doesn’t do so with his own reputation. He is using the good name of his state and its 8 million people. Right now, he’s taking advantage of trust that doesn’t belong to him. Of course, the thing about high-risk manoeuvres like this is they can pay off handsomely. But they might also crash and burn. Regardless, what should now be clear is we urgently need to stop this potentially perilous investment scheme of the Treasurer and NSW’s Treasury officials. If banks and superannuation funds are barred from using debt to invest in stocks, the same logic should apply – and then some – to the NSW balance sheet. Embracing debt to buy stocks, and billing taxpayers is controversial in ordinary times. But right now, the state cannot afford to bankroll Perrottet’s huge bet. He might have a big risk appetite. NSW taxpayers do not.

Employment levels in the construction industry, which accounts for around 8.8% of Australia’s total workforce, increased 0.3% in the three months to May 2021, after a fall of -1.6% in the three months to February. Tim Lawless, CoreLogic’s Research Director, said “With the surge in dwelling approvals over the past 12 months, Australia’s residential construction sector is working through the early stages of what is set to be an extended period of heightened construction activity.” 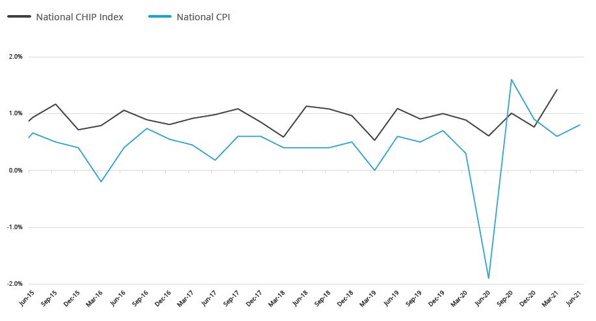