Local: The ASX200 index fell slightly by -0.9% relatively outperforming the developed markets which did not fare as well.

Housing: Sydney and Melbourne’s market slowdown has seen CoreLogic’s national Home Value Index (HVI) continue to lose steam through April. Housing values are still rising at the national level. However, the 0.6% monthly rate of growth is the lowest reading since October 2020.

Sydney and Melbourne, which have the heaviest weighting in the HVI, were the main drag on the headline growth rates. Sydney housing values recorded the third consecutive month-on-month decline, down 0.2%, while Melbourne values were flat. Technically values are down over three of the past five months in Melbourne. Hobart also recorded a negative monthly change (-0.3%), the city’s first monthly fall in 22 months.

Stretched housing affordability, higher fixed term mortgage rates, a rise in listing numbers across some cities and lower consumer sentiment have been weighing on housing conditions over the past year. As the cash rate rises, variable mortgage rates will also trend higher, reducing borrowing capacity and impacting borrower serviceability assessments.

Retail Sales: Retail sales in Australia rose by 1.6% month-on-month in March 2022, following a 1.8% gain in the prior month and increasing for the third month in a row, a flash reading showed. March’s result saw retail sales hit their highest level on record of AUD33.63 billion after the previous record peak in November 2021, amid the continued easing of curbs.

Bond Yields: The Australian government 10-year bond continued to rise finishing the month at 3.12%. The US 10-year bond also rose significantly by 54 bps to 2.89% off the back of rising inflation fears and interest rate hikes.

Exchange Rate: The Aussie dollar fell slightly against the American dollar to hit $0.705 and remained steady against the Euro at $0.669.

Inflation: The annual inflation rate in Australia surged to 5.1% in Q1 of 2022 from 3.5% in Q4 of 2021, surpassing market estimates of 4.6% and marking the highest reading since the introduction of the Goods and Services Tax in the early 2000s, reflecting soaring fuel prices and surging building costs.

Consumer Confidence: The Westpac-Melbourne Institute Index of Consumer Sentiment fell by 0.9% to 95.8 in April from 96.6 in March. This modest decline follows the sharp 4.2% fall in March. At that time concerns around interest rates and inflation were starting to weigh on confidence. These were compounded by Russia’s invasion of Ukraine, an associated spike in petrol prices, and severe weather events.

US Employment: Total nonfarm payroll employment increased by 428,000 in April, and the unemployment rate was unchanged at 3.6%. Job growth was widespread, led by gains in leisure and hospitality, manufacturing and transportation and warehousing.

Purchasing Managers Index: The Australian Industry Group performance of manufacturing index increased to 58.5 in April 2022 from 55.7 in the previous month, the highest since July 2021.

Inflation is the talking point gripping the global economy and is becoming the pre-election elephant in the room. Headline inflation surged to 5.1% in Q1 2022, the highest annual level we have seen in more than 20 years. Economists have correctly tipped an early May pre-election rate rise, from 0.1% to 0.35%, with more rate hikes likely to come throughout the year.

The result came in much higher than its market expectation previously of 4.6%, while underlying inflation the Reserve Bank`s preferred method of measurement as it doesn’t take into account products of high volatility such as oil, lifted to 3.7%, way above their target band of 2-3%. Cost Price Inflation also lifted 2.1% over the quarter, well ahead of expectations. Trimmed mean inflation, which strips away large price movements, rose 1.4% and is now at its highest growth rate since 2009. The figures released by the Australian Bureau of Statistics have exceeded all expectations.

Households are currently feeling the greatest pinch from the current price rises, with non-discretionary inflation, this is inflation that included expenses such as petrol, food, housing and health, which has grown significantly to 6.6% over the year to March 31. These particular price rises can be attributed to increased transport costs, supply chain disruptions and increased input costs.

Currently, the biggest contributors to CPI were new dwellings, which have increased 5.7%, fuel which is up by 11% and tertiary education up by 6.3%. Automotive fuel has reached a record level for the third consecutive quarter with annual price rises at the fastest pace since Iraq`s invasion of Kuwait back in 1990. 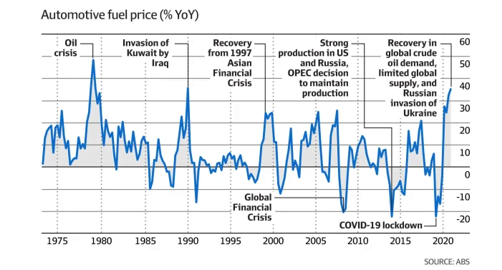 Wages growth is another factor that is wanted sustainably between the 2-3% target before an increase in interest rates occurs. The most recent wage data which goes to the end of 2021 was at a 2.3% growth rate. Showing that the gap between wage growth and inflation is becoming ever more distant. Labor treasury spokesman Jim Chalmers stated that “hard-working Australians are being held back by pay that isn’t keeping up with prices, generational debt without a generational dividend and no real plan to fix the cost of living crisis beyond the election”. Wages pressure has been building due to the low 4% unemployment rate and current labour shortages which could be used as strong evidence to justify further rate rises.

With global inflation continuing to surprise and central banks around the world tightening monetary policy, the RBA may fall behind the curve if they do not act soon. A record low cash rate of 0.1% is clearly no longer appropriate for the current economy, this means the RBA must join other central banks around the world and tighten monetary policy sooner rather than later. The RBA could lose all credibility if they decide not to.

Looking overseas has been a good indicator for the Australian economy in recent times. From the COVID-19 pandemic to ways to reduce the impact of global warming this should be another occasion to do the same. With inflation at three-decade highs of 6.9% in New Zealand and 6.7% in Canada, both countries hiked interest rates by 50 basis points, lifting cash rates to 1.5% and 1% respectively. Following a 0.25 basis point rise in both February and March. The US Federal Reserve have also indicated a further 0.5% increase at the start of May.

Financial markets have also lifted expectations for where they believe the cash rate will fall by year’s end from 2% to 2.5%, they then expect rates to increase to 3.4% by September 2023. Equating to 13 rate hikes.

The global pressures we are currently facing, from China`s rigid lockdowns, supply-side struggles and the Ukraine-Russia conflict will all play a significant role in the inflation forecast for the next 12 months. If the global economy can control these areas a smooth landing should be on the cards, if not the dooms of a recession could be knocking on our door.

Following the emergence of COVID-19 and a significant upturn in investment in digital health infrastructure, Australia`s health system, like all health systems globally, is rapidly changing to a more digitalised future. The reimagining Healthcare Survey 2022, one of the largest to be initiated since the start of the pandemic, found that around 70% of Australians are willing and ready to use virtual health and over 80% are ready to share their health data in a digitally enabled health system.

In response to the pandemic, the health system was able to support increased access to the health system by rapidly shifting to telehealth, which grew from 1% to more than 25% of all Medicare consultations. The question now is whether the sector will continue to sustain this momentum post COVID-19 rather than reverting back to their pre-pandemic ways. The sector is enthusiastic to maintain this feature across general practices, specialist care and allied health with a payment mechanism to support it.

An increase in digital health enablement policies is the first sign of stamina for telehealth, the inclusion in major policies such as the National Preventative Health Strategy and the draft Primary Health Care 10 year plan are both promising signs for the sector. The acceleration of telehealth was entirely necessary during the recent lockdowns, it must be noted that we should not look at merely replacing existing healthcare practices but rather enhance healthcare as a whole to improve the consumer experience.

This can be achieved by working with consumers to co-design a digitally enabled future healthcare system that empowers Australian people and integrates virtual and traditional systems.

Looking ahead, the health workforce is expected to experience significant shifts in its age profile, resulting in declining workforce participation rates and a real challenge to meet the health needs of an ageing population. Australia’s population is estimated to reach 35.9 million by 2050, with the proportion of people aged over 65 increasing by 6% to a total of 22%. Over this same period, the workforce participation rate is expected to decline from 66% to 64%. This decline, together with expected growth in healthcare demand driven by an ageing population, will have a catalytic effect on both the workers and the health care system as a whole. It is estimated that our health workforce must become four times more productive by 2050 to meet this increase in demand.

It is clear to see that the current system is unsustainable, a Deloitte model of public and private hospital bed requirements from 2016 to 2036, shows that Australia must build a 375 acute bed hospital every month for the next 15 years to keep pace with demand and replacement of ageing stock.

The whitepaper, Australia’s Health Reimagined has identified a 3 horizon shift that will need to happen in order to meet changing health care needs. For the purpose of this article we will not go into depth but will highlight the different areas.

Horizon 1: Connected Consumer – This is where people experience a fragmented, one size fits all type of care. The health system is focused solely on treating illness and little data sharing occurs.

Horizon 2: Empowered Consumer – This is where people are empowered to access care and services that are easier to navigate and access. There is moderate data sharing and workflows ease the administrative workload of health staff.

Horizon 3: Confident Consumer – This is where people take an active role in managing their health and wellbeing and have strong relationships with their healthcare providers. The system has robust data interoperability, digital tools system and a connected ecosystem.

Reaching the optimal outcomes in horizon 3 will only be possible if the existing digital health technologies in horizon 1 are improved and made more efficient, by doing this it will effectively form the building blocks required for new and augmented models of care in horizon 2 and 3. It is vital that the Australian healthcare system takes advantage of our current situation and seizes the opportunity for lasting change.