Local: The ASX200 index rose 3% in April. The Information Technology sector lead the way with a 10% rise, while the Energy sector was one of the few to end the month lower than where it started, down 4.9%.

Housing: Australian housing prices gained 1.8% in April according to CoreLogic’s national home value index, with the pace of gains easing slightly from a 32-year high in March. The continued growth in this area is pricing new entrants out of the market, with first home buyers dropping 4%.

Exchange Rate: The Aussie dollar maintained value against both the American dollar, at $0.770, and the the Euro at $0.642.

Consumer Confidence: Westpac’s Melbourne Institute recorded a third straight lift in consumer sentiment, surging ahead up 6.2%. That left the index up a huge 57% on April last year when coronavirus lockdowns sent confidence crashing. The index reading of 118.8 was the highest since August 2010 and showed optimists now far outnumbered pessimists.

Business Conditions: The ABS reports that 18% of all surveyed companies conveyed a drop in revenue in April. This figure represents a 6% decrease from March, and the lowest monthly figure recorded since July 2020, when nearly half of all businesses recorded plummeting revenues. 22% of firms reported a revenue uptick and the number of businesses reporting an increase in staff remains level at 9%, echoing encouraging unemployment figures and record-high numbers of new job listings.

Purchasing Managers Index: Rather than measure an economy directly, a PMI measures the business activity that helps drive it. A PMI above 50 indicates an expanding market, while a PMI below 50 indicates a contraction. The Australian PMI has risen again to 61.7, while the US PMI has pulled back from 64.7 to 60.7.

Covid: Infection levels are rising in 32 countries, down from 69 countries in March. 153 million infections have been recorded by the end of April, resulting in 3.35 million deaths. 181 countries have started vaccination campaigns, with 1.68 billion doses being delivered so far.

Saved a few pennies during the pandemic? Well, you are not the only one. Consumers all around the world have been saving, with a combined value of ~7 trillion dollars stockpiled since the pandemic began. 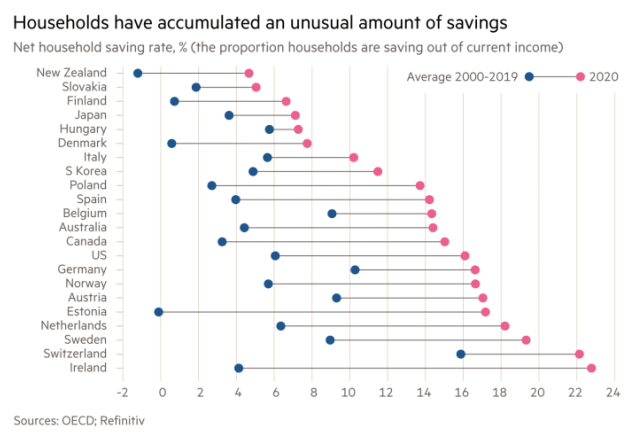 The combination of more than a years’ worth of pent-up demand, fueled by exceptionally high savings is expected to result in the perfect storm of consumer spending. If just a third of consumer excess savings are spent, Mark Zandi, chief economist at Moody’s Analytics estimates that global economic output would be boosted by 2% both this year and next.

2020 saw the largest fall in global output in modern history, yet household incomes were largely shielded by the unprecedented government assistance provided by most advanced economies.

The only factor that could restrain the economic boost is the inequality seen in the savings figures. Jan Hatzius, economist at Goldman Sachs, estimated that nearly two-thirds of US excess savings were held by the richest 40 per cent of the population, which similar inequity observed around the world.

Australians are just starting to get back to their pre-pandemic lives, but the economy may be a step ahead of us all. NAB Chief economist, Alan Oster, has forecast that GDP will have recovered to pre-pandemic levels in the March quarter of this year. (Complex economic indicators like GPD can take many months to calculate, so March quarter figures are not yet known)

Mr Oster has good reason to be so optimistic about recovery. The NAB quarterly business survey indicates business investment plans for the next 12 months have risen to their highest level in 27 years. Business conditions, hiring intentions and capital expenditure are all well above their pre-Covid levels, indicating that this forward momentum is likely to be sustained over coming quarters and will help drive economic growth. 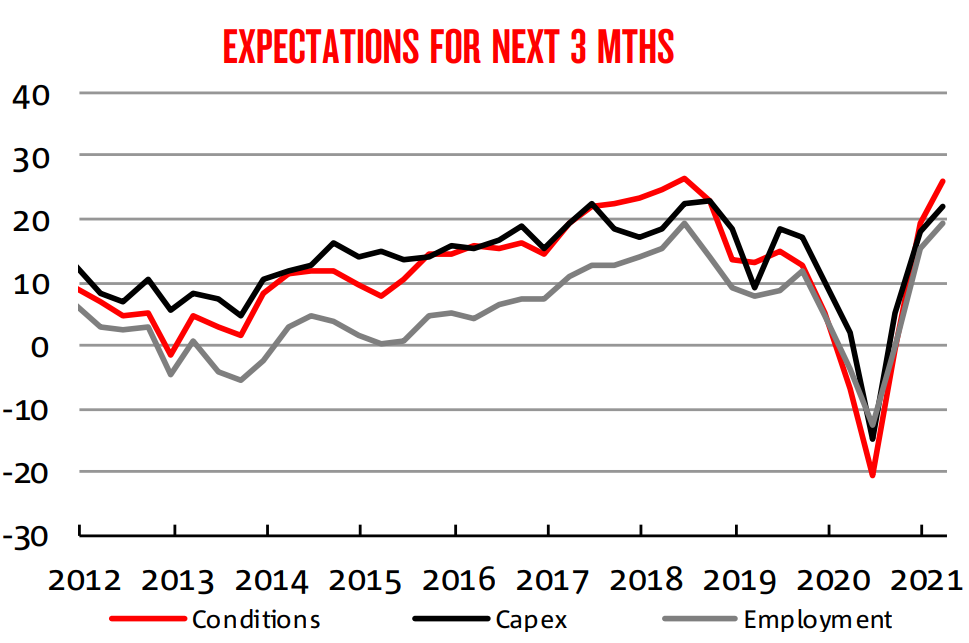 Forward orders are a leading indicator measured in the survey. By measuring the inputs that will be converted to GDP in the coming months and years, forward orders have historically provided a useful guide to underlying momentum in the economy. This indicator also strengthened further in Q1, reaching its highest level since 1994.

It is worth noting that there is considerable variance in the recovery seen by different sectors of the economy. Capacity utilisation in the retail sector for example, which in aggregate has been boosted by the change in spending patterns, is well above its pre-Covid level. Some service industries however, as well as mining, remain below according to most recent data.