In a decision released on 27 September 2018, the Fair Work Commission (Commission) has made changes to penalty rates for all retail employees covered by the General Retail Industry Award 2010 (Award). The changes will apply from 1 November 2018.

The Commission’s review of the Award has distinguished between the purpose of casual loadings and penalty rates and their decision has been made to ensure that the Award provides a “fair and relevant minimum safety net of terms and conditions”.

Table 2 below illustrates the change in the hourly rate for a casual retail employee (Level 1) with the changes to the Mon-Fri after 6pm penalty rate.

In the same decision, the Commissioner has also decreased the penalty rates for shift workers.

Sunday penalty rates will still undergo the staged reduction as per the Productivity Commission report into workplace relations from earlier this year.

We expect that news of the decision is sure to cause headaches for retail businesses in the lead up to Christmas as the unbudgeted changes hit their bottom line as they scale up their workforce in preparation for the busiest time of year in retail. Furthermore, many small businesses will remain ignorant of the change for some time to come and inadvertently underpay their employees. 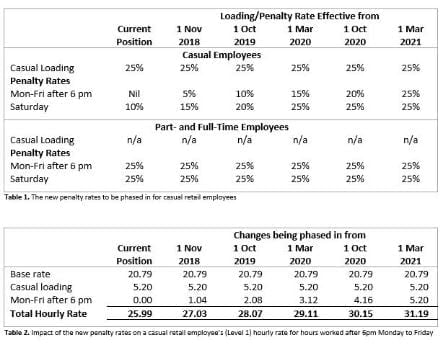 In Australia, around 34 million gift cards are sold each year with an estimated value of $2.5 billion. On average, an estimated $70 million is lost because of expiry dates.

Applying from 1 November 2019, new laws are in effect that introduce a regime for the regulation of gift cards including:

What business needs to do

From 1 November 2019, businesses should ensure:

A number of larger businesses have adopted a 3 year expiry period following the introduction of NSW laws. These include David Jones, Myers, Westfield, Rebel Sport, Coles, and Dymocks. Other retailers have no expiry dates including iTunes, JB Hi-Fi, EB Games, Woolworths and Bunnings. Generous expiry periods are a point of difference when consumers are working out which retailers gift card to purchase.

What happens if a business ignores the new rules?

What happens if a business becomes insolvent or is sold?

If a business changes owners, the new owner must honour existing gift cards and vouchers if the business was:

Most businesses have a good understanding of the impact of alcohol, sexual harassment, bullying and anti-social behaviour at Christmas parties.

It’s a good time to remind employees that the staff Christmas party is considered to be the workplace and they need to protect the reputation of the company.

Gifts for employees need to be kept below $300 per person. The Tax Office consider it to be a minor benefit and as such, exempt from FBT. Gifts above this level are deductible to the business but FBT will apply.

Entertaining your clients at Christmas is not tax deductible. So, if you take them out to a nice restaurant, to a show, or any other form of entertainment, then you can’t claim it as a deductible business expense and you can’t claim the GST credits either.

Clause with a cause

Charity gifts are an increasingly popular form of corporate giving. For tax purposes, you can only claim a tax deduction for donations made to deductible gift recipients (DGRs). If you or your client receive anything for the donation, then it’s not tax deductible because you have purchased something rather than made a donation.

Small business is still a vote winner with the Government and Opposition teaming up to accelerate tax cuts for the sector by 5 years impacting on an estimated 3.3 million businesses.

Parliament recently passed legislation to accelerate the corporate tax rate reduction for corporate tax entities that are base rate entities (BREs). Under the new rules:

The problem for franking credits

Quote of the month